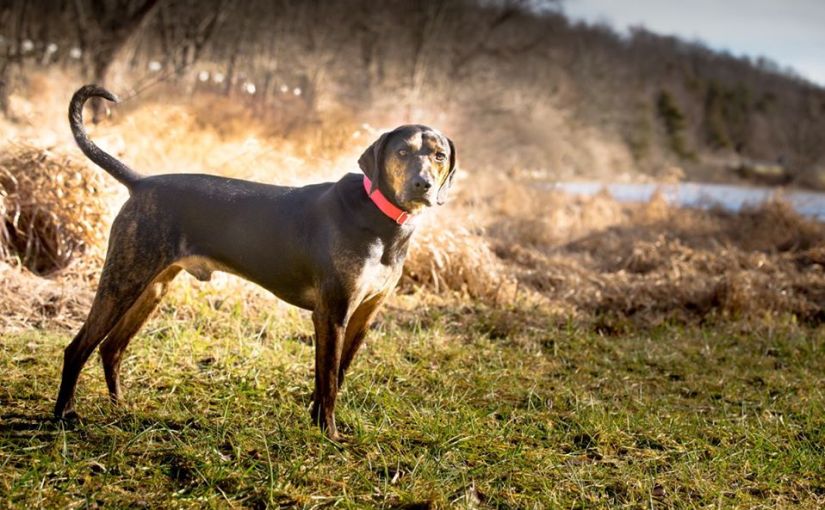 Even with two of the tiny puppies still here, the house seemed much too quiet, so on Sunday Nick and I went to visit Rockee, a hound dog in a boarding facility nearby. 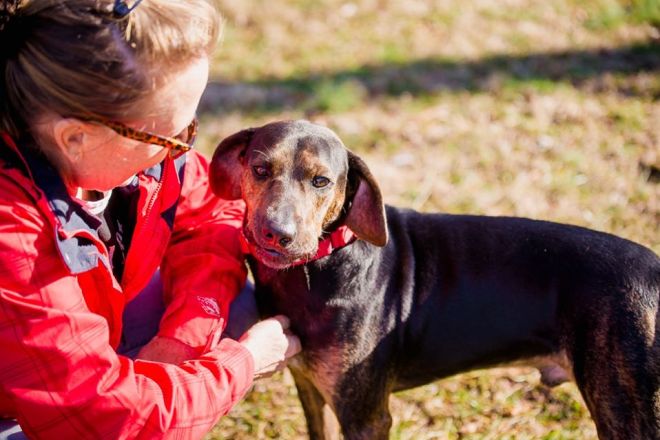 Rockee (formerly known as Witch Doctor) is an OPH dog who, through no fault of his own, landed in boarding because of foster’s schedules and an unexpected return. He’s had a few faithful boarding buddies who have taken him for hikes and gotten him out to adoption events, but living in a boarding facility isn’t great for any dog’s mental state, plus it costs the rescue money that could be better spent saving dogs. 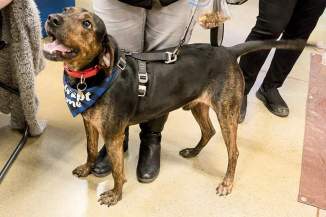 Rockee was adopted and then returned (after one day) for not getting along with the adopter’s schnauzer and apparently he’d had words with at least one other dog at a recent adoption event. I figured it could mean Rockee is picky about his company or it might just mean he’s stressed out from such an unstable lifestyle and life in a kennel.

The adopter could have done a much better job allowing Rockee to slowly adjust to his new home before throwing him together with his new fursibling while he was still getting his feet under him. Whenever you bring home a new dog (or foster dog), the dog needs time to adjust and should be given plenty of crate time to get used to the new smells and sounds. Interaction with new fursiblings should be supervised to start, even if they seem like the best of friends at the Meet and Greet. Neither of those things happened for Rockee. Obviously, he wasn’t given a real chance and deciding to return him after only one day seemed less than fair.

We took Fanny with us to see how she would get along with Rockee. It was a pretty day, so Nick and I put on our hiking boots and the three of us took Rockee for a hike in Cordorus Park. The kennel attendant said Rockee is a sweetheart and he certainly was– bounding out to meet me with his whole body wagging. I’d met him once before, only briefly when I helped Nancy get adoption pictures of him. I remembered the long ears and busy nose, but not much else.

Rockee hollered like a hound dog at the sight of Fanny, but quieted down once we started walking. Fanny was enamored with him and followed on his tail. Once we were out and moving, though, he lost interest in her and was captivated by the scents of the forest. 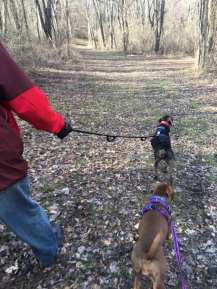 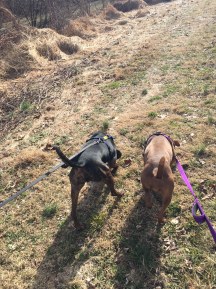 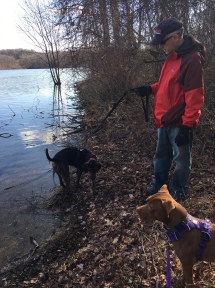 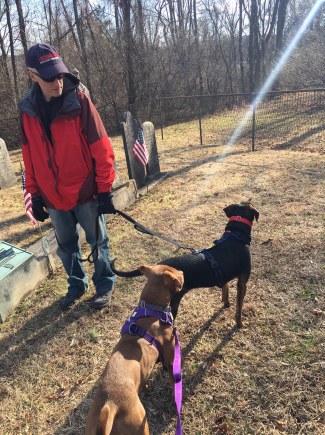 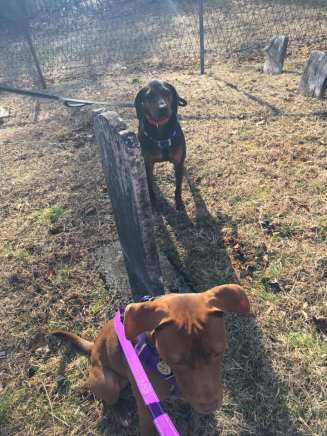 After an hour, it was obvious that the two of them were fine together, at least on leash, so we decided to bring Rockee home for a few days to see how he does at our house.

Here’s what I can tell you about Rockee after less than 48 hours—He is incredibly sweet and friendly with all the people he’s met. He seems to like men a lot, but people in general. Ian is definitely a fan and after two days with him asked, “Why is this dog not adopted?” 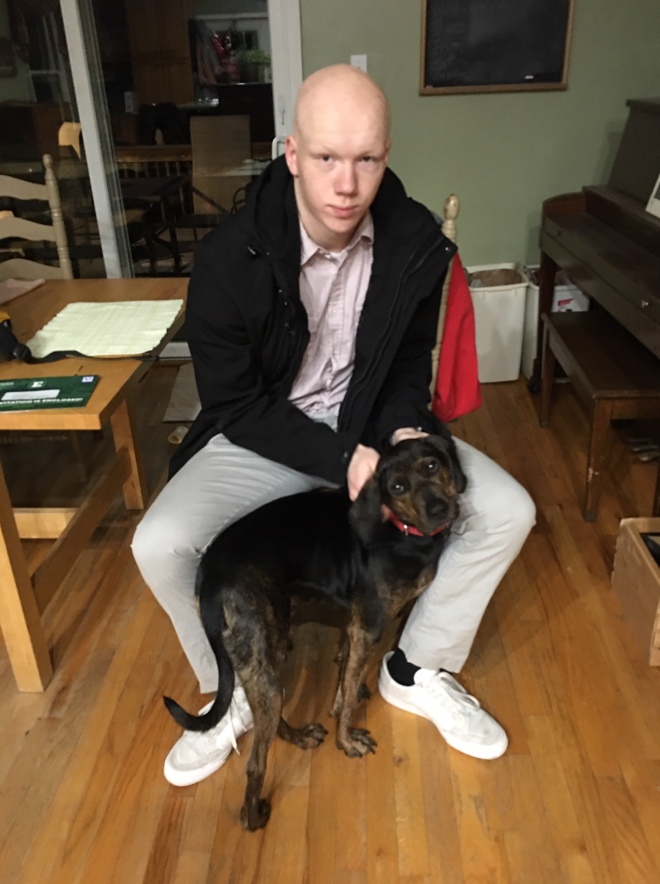 My question exactly. He’s housebroken and crate-trained. He has wonderful leash manners, which is saying something considering his hound-dog tendencies. He has an excellent appetite and could probably use an exercise program and a few less treats (although his appreciation of treats and the affection of the people at least in this house, will make that tricky).

Rockee is very happy to nap on a couch and although he’s quite interested in whatever it is you’re making up there on that counter, he’s respectful when directed and so far, keeps his nose off the counter even when you aren’t looking. 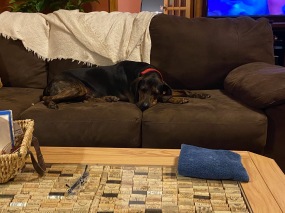 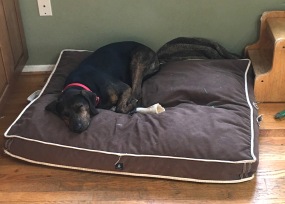 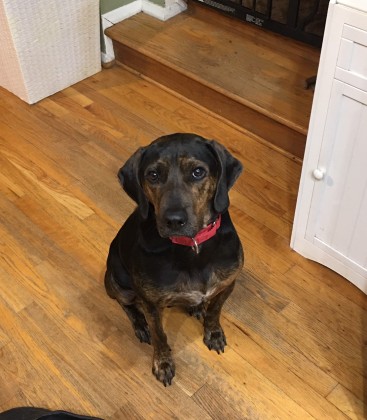 Really, this is a nice dog. His only fault might be that he’d rather be with you than left alone but after a few pitiful hounddog whines, he quiets right down and accepts his fate. 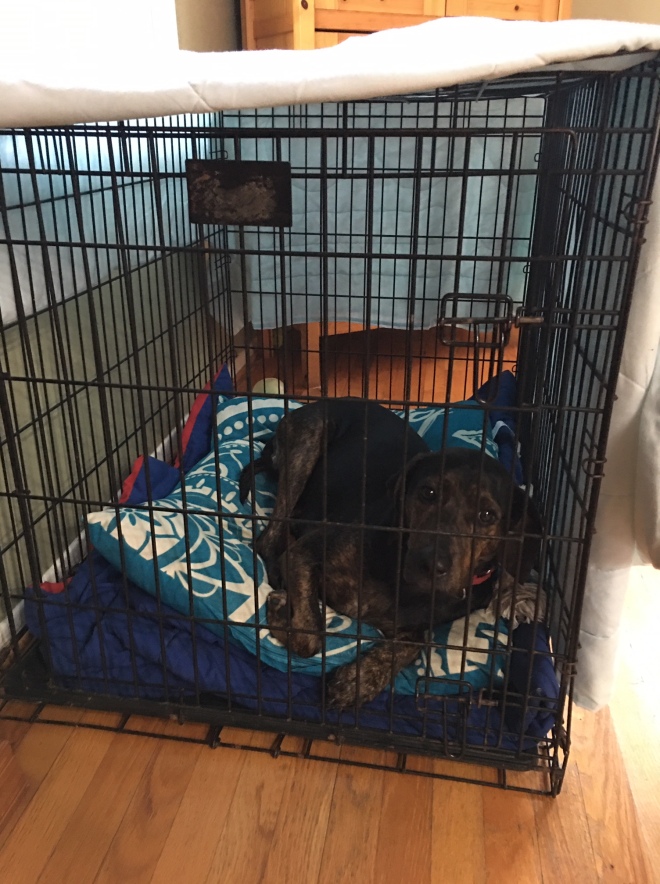 The two little gerbils puppies are still super cuties who have lots of happy energy and LOVE to snuggle. Amazingly, they are still awaiting their forever families. 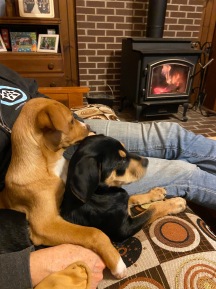 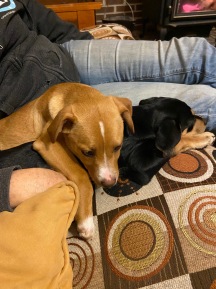 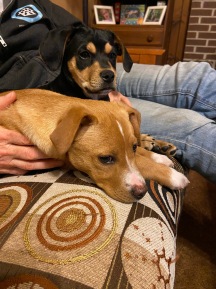 I’ve gotten a little intel on their parents so I can tell you with good authority that they are going to be small dogs. Mom is a dachshund mix and dad is a mutt who weighed about 28 pounds. So, if you’re a small dog family looking for a sweetheart puppy for Valentine’s Day—I’ve got your pups! Apply today.

And if you’re looking for a fantastic family dog with a short, shiny coat, and a beautiful, mournful bark who will make a steady hiking companion or a couch buddy, I’ve also got your dog! Apply today. 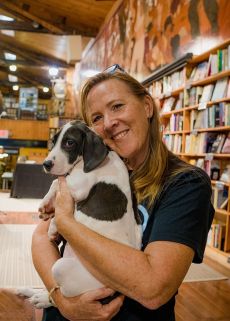 If you’d like regular updates of all my foster dogs past and present, plus occasional dog care/training tips from OPH training, be sure to join the Facebook group, Another Good Dog.

For information on me, my writing, and my upcoming book, One Hundred Dogs and Counting: One  Woman, Ten Thousand Miles, and a Journey into the Heart of Shelters and Rescues, visit CaraWrites.com.

And if you’d like to know where all these dogs come from and how you can help solve the crisis of too many unwanted dogs in our shelters, visit WhoWillLetTheDogsOut.org.

Our family fosters through the all-breed rescue, Operation Paws for Homes, a network of foster homes in Virginia, Maryland, D.C., and south-central PA.

If you can’t get enough foster dog stories, check out my book: Another Good Dog: One Family and Fifty Foster Dogs . It’s available anywhere books are sold.

I love to hear from readers and dog-hearted people! Email me at carasueachterberg@gmail.com.

Many of the pictures on my blog are taken by photographer Nancy Slattery. If you’d like to connect with Nancy to take gorgeous pictures of your pup (or your family), contact: nancyslat@gmail.com

I am a writer, blogger, and dog rescuer. I live on a hillside farm in Southern York County, PA but my heart is in the mountains of Virginia. Find more information about my books, my dogs, and all my writing adventures at CaraWrites.com. View all posts by Cara Sue Achterberg